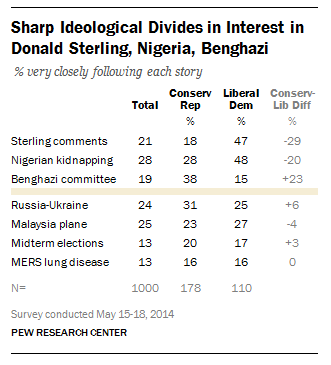 The country’s ideological divide can be measured a lot of ways, such as by votes or how people stand on issues. But it can also be seen in the news stories that people follow and, last week, conservatives were more interested in the return of the Benghazi story, while liberals focused on coverage of the kidnappings in Nigeria and the uproar over the racial comments of Los Angeles Clippers’ owner Donald Sterling.

By contrast, 38% of conservative Republicans followed news about the appointment of a new committee in the Republican-controlled House to look into the 2012 attacks in Benghazi, Libya, that killed four Americans, including the U.S. ambassador, very closely. Republicans have questioned whether the Obama administration and the State Department, then headed by Hillary Clinton, took adequate measures to safeguard the U.S. compound.

However, the Benghazi story ranked much lower on the reading and viewing lists of liberals. Just 15% said they had followed it very closely, while 45% said they followed the story “not at all closely.”

When it came to the overall public, 28% said they followed the Nigerian kidnapping coverage very closely, 25% for the missing Malaysia plane, 24% for the Russia-Ukraine situation and 21% for the Sterling story. In late March, 39% had said they were following the Malaysia plane story very closely.