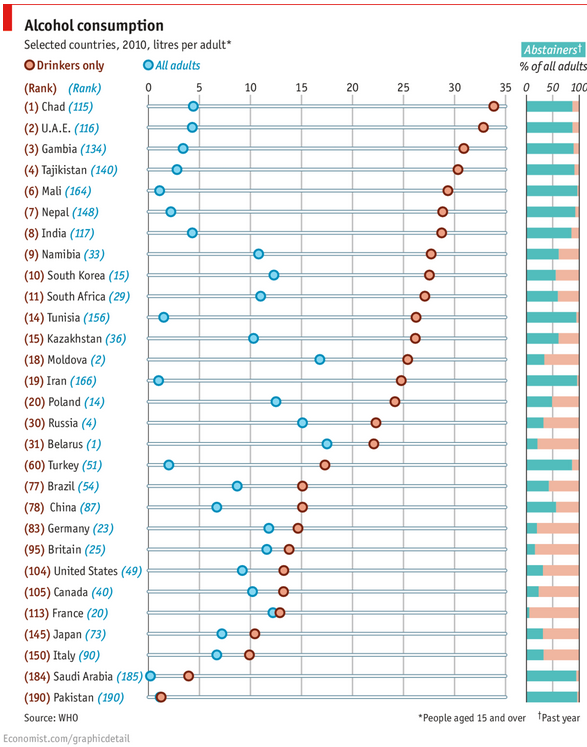 It’s always nice when a graphic not only presents its information clearly and attractively but when it leads you to look at things in a new way, as this chart from The Economist does. Russia and other former Soviet republics and countries of the former Soviet bloc have long been considered among the heaviest-drinking places in the world. And in fact, a new World Health Organization report finds that nine of the 10 countries with the highest per-capita consumption — 13 liters or more of pure alcohol per year for everyone aged 15 and up — are former Soviet-bloc countries. (The exception: tiny Andorra, wedged between France and Spain.)

But even in those nations not everyone drinks. Indeed, when the analysis is restricted only to those people in a country who do drink, the consumption rankings change dramatically.

As the chart shows, Chad and the United Arab Emirates have by far the heaviest drinkers in the world, averaging respectively 33.9 and 32.8 liters of pure alcohol a year (or 71.8 and 70.9 grams a day) — even though there aren’t many drinkers in those countries. Russia falls from 4th (total per-capita) to 30th (drinkers only), just ahead of Belarus. As a rule, the biggest disparities between per-capita and drinkers-only consumption are in countries where there are legal prohibitions or strong religious or cultural taboos against alcohol use.