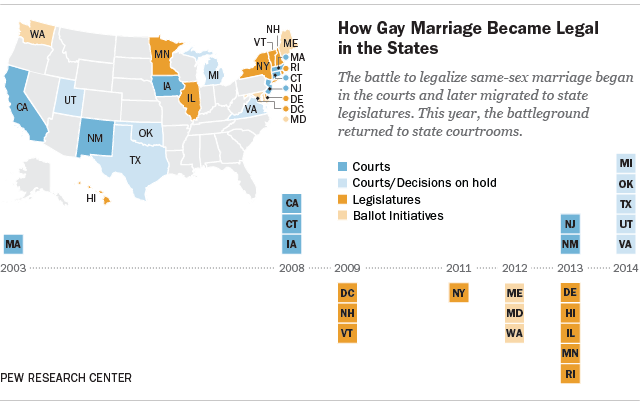 A federal appeals court today will hear arguments in a constitutional challenge to Utah’s same-sex marriage ban – the first of five court challenges to state bans taking place over the next two weeks. This flurry of court activity comes on the heels of a number of other decisions striking down same-sex marriage bans in three other states.

Just a year ago, most of the battles to legalize same-sex marriage were occurring in the halls of state legislatures or at the ballot box. Of the 17 states that currently allow gay marriage, 11 have legalized the practice via legislative action or through a ballot initiative. But in the last six months, two states – New Jersey and New Mexico – have legalized same-sex marriage through state court rulings. And in five other states, lower federal courts have struck down gay marriage bans, although these rulings have been stayed pending appeals.

This shift back to the courtroom has been prompted in part by last year’s Supreme Court decision striking down the federal Defense of Marriage Act (DOMA.) While the high court’s ruling in that case, United States v. Windsor, did not specifically find a constitutional right to same-sex marriage, it has been interpreted by many gay rights advocates as a call for equal treatment for gays and lesbians, prompting supporters to bring new constitutional challenges to same-sex marriage bans around the country.

Another factor that may be dissuading gay marriage supporters from using legislative process is the prospect, in the next year or so, of a Supreme Court ruling on the constitutionality of gay marriage. With so many cases working their way up the federal court system, most observers on both sides this debate expect the high court to weigh in on this issue soon.

For now, however, almost all action on the issue will be likely decided in courtrooms. In addition to the five cases slated to move forward this week and next week, legal action is expected soon in Arizona, Colorado, Florida, Indiana, Kentucky, Louisiana, Mississippi, North Carolina,  Pennsylvania, West Virginia and Wisconsin.