The massive protests sweeping Venezuela come at a time when many in that country have an increasingly dark view of both their own standard of living and the direction of the nation’s economy. 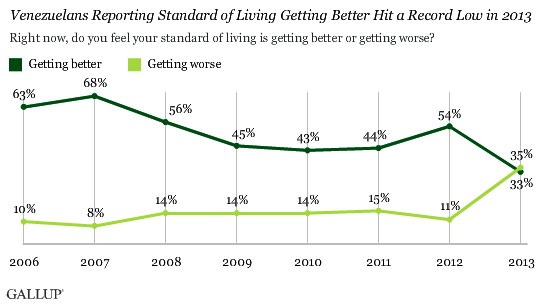 Pessimism about the economy also runs high. About six-in-ten (62%) Venezuelans said the economy was getting worse, a huge increase compared with the 22% who held that view in 2012.

Beyond the economy, fear of crime contributes to Venezuelans’ unhappiness. In the Gallup poll, eight-in-ten said they did not feel safe walking alone at night in the city or area where they lived, while those saying they did feel safe dropped from 34% in 2011 to 19%.

Venezuelans have little trust in national government, say economy is in poor shape

Despite ongoing crisis in Venezuela, Maduro hangs on