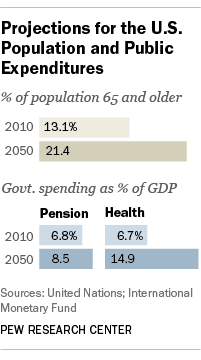 One-in-five Americans are expected to be 65 and older by mid-century, and this could be a problem for the country. There is worry that government and household finances may be pushed to the brink by rising pension and health care expenditures. Economic growth, we are warned, might suffer with fewer workers and more retirees. But what does the public think?

It may come as a surprise that the American public is pretty optimistic. In a Pew Research Center survey, only about one-in-four Americans say the growing number of older people is a major problem for the country, nearly two-thirds are confident they will have an adequate standard of living in their old age, and almost one-half say that individuals are primarily responsible for their own economic well-being as they get older. 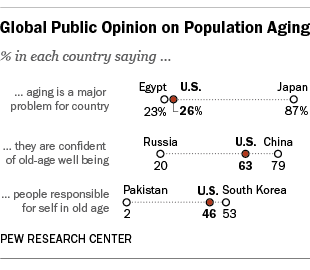 These opinions differ sharply from public opinion in most of the 20 other countries that we surveyed. Americans are among the least likely to view aging as a major problem; they are more confident than most of their old-age economic well-being; and they are one of few to express in plurality that individuals are primarily responsible for their own well-being in old age.

Why are Americans so confident? And is there a gap between demographic reality and U.S. public opinion? It is hard to be sure, but the views of the American public are consistent with demographic projections. On two major counts—population growth and population aging—the future for the U.S. is robust compared with other countries.

Americans may have another reason to feel more confident than others about their demographic future: the U.S. is aging at a comparatively slow pace. The median age in the U.S. is expected to increase from 37 in 2010 to 41 in 2050. Meanwhile, a greater increase is expected globally, from 29 to 36, and most people in South Korea, Japan and Germany are expected to be older than 50 by mid-century.

But the U.S. population is still aging, right? Does that raise no concerns?

It is possible the public has heard the alarm bell but believes that corrections will be made. Although it is difficult to anticipate the choices individuals might make in the future, Americans may plan to boost their retirement savings. And family structures may be evolving to adapt to the needs of the elderly, perhaps through growing numbers of multi-generational households.

The future state of public expenditures also need not be gloomy. The principal driver of health care expenditures is cost inflation and reining that would significantly brighten the long-run outlook for Medicare and Medicaid. The Congressional Budget Office has also estimated that gradually raising the full retirement age for Social Security to 70 for people born in 1973 or later (it is currently at 67 for people born in 1960 or later) would reduce federal outlays on the program.

When it comes to the workforce, the elderly are already showing signs of greater activity. The labor force participation rate among those 65 and older has nearly doubled since 1985. With people living longer and healthier lives, we may continue to see more elderly workers choosing to delay retirement in the coming decades.

Economists have also noted that modest gains in productivity, through innovation, capital investment or a more educated workforce, may counter the effects of an aging workforce. Immigration may also be used to boost the size of the workforce.

All this is not to say that population aging presents no challenges. A recent report from the National Academy of Sciences posits that “Population aging will have profound fiscal effects as well as effects on the broader economy.” But the same study concludes that “[aging does not present]…insurmountable challenges for the United States…An aging society need not have lower living standards, slower growth in innovation and productivity, or inefficiently high tax rates.” The American public, for now, is a believer in the positive.