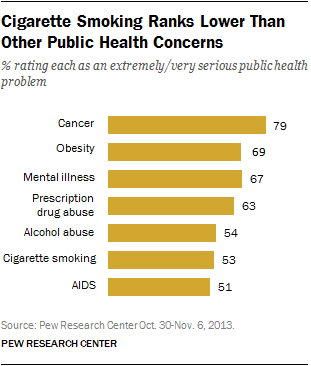 It’s been 50 years since the U.S. Surgeon General issued a groundbreaking report on the dangers of smoking. The report opened the way for decades of measures to curb tobacco use —measures that helped save an estimated 8 million lives over that time span, according to a study published this week in the Journal of the American Medical Association.

About half (53%) of Americans still see cigarette smoking as an extremely or very serious public health problem, according to a Pew Research Center survey conducted last November. But the public now sees it as less of a problem than a number of other public health issues like cancer and obesity, and less of a problem than it did in 2004 when 72% rated it as serious in an ABC News/Time poll.