The Vatican plans to canvass Catholics around the world about their views on some church teachings, according to a report Thursday in the National Catholic Reporter. The goal is to gather “input from local sources” in preparation for an October 2014 Synod of Bishops to discuss family issues and challenges.

The Vatican plans to ask a range of questions on topics related to the family, including divorce, artificial contraception and same-sex marriage, according to the publication, which obtained a copy of the Vatican questionnaire.

While some news reports have referred to the effort as a poll, it appears that bishops around the world will be given latitude to collect and report information in many different ways. Still, according to NCR, this is “the first time the church’s central hierarchy has asked for such input from grassroots Catholics since at least the establishment of the synod system following the Second Vatican Council.”

The U.S. Conference of Catholic Bishops, which is responsible for passing on the Vatican’s request to the country’s bishops, has said it will “follow the usual process, since Rome asks for this kind of consultation on a regular basis,” and that “it will be up to each bishop to determine what would be the most useful way of gathering information to provide to Rome.” 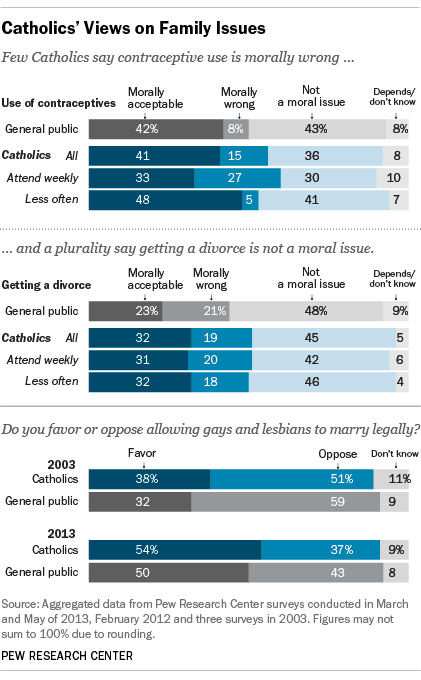 The Catholic Church teaches that divorce is “immoral” and “a grave offense against the natural law.” The Vatican questionnaire asks, “Could a simplification of canonical practice in recognizing a declaration of nullity of the marriage bond provide a positive contribution to solving the problems of [divorced and remarried] persons?”

The church opposes same-sex marriage, and the Catechism of the Catholic Church – an explication of Catholic doctrine – calls homosexual acts “acts of grave depravity.” But the catechism also says that homosexuals “must be accepted with respect, compassion, and sensitivity.” The Vatican questionnaire asks: “Is there a law in your country recognizing civil unions for people of the same sex and equating it in some way to marriage? … What is the attitude of the local and particular [c]hurches towards both the [s]tate as the promoter of civil unions between persons of the same sex and the people involved in this type of union?”

More U.S. Catholics favored allowing gay and lesbian couples to marry legally (54%) than opposed it (37%), according to aggregated 2013 Pew Research polls, although support for same-sex marriage was lower among those who say they attend Mass at least once a week (43% favored same-sex marriage and 49% opposed it). A third of U.S. Catholics (33%) said homosexual behavior is a sin, while 53% say it is not a sin.

Regarding Humanae Vitae, Pope Paul VI’s 1968 encyclical that reaffirmed the church’s opposition to artificial contraception, the Vatican asks: “Is this moral teaching accepted? What aspects pose the most difficulties in a large majority of couples accepting this teaching?”