There has been a drumbeat of headlines and an outpouring of congressional criticism about the widespread technical problems plaguing the online health insurance exchanges where consumers were supposed to be able to explore, compare and buy coverage. The contractors who built the online marketplace were grilled last week before the House Energy and Commerce Committee, and today, Health and Human Services Secretary Kathleen Sebelius is scheduled to sit in the hot seat. 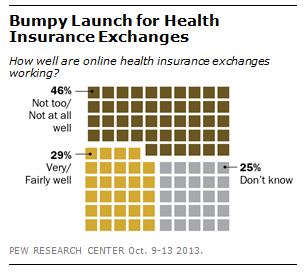 A Pew Research Center survey conducted Oct. 9-13, shortly after the Oct. 1 launch of the exchanges, found a broad impression among the public that they were not working.

Assessments were somewhat more positive in states with state-based health care exchanges (32% say exchanges are working well) than in those where these exchanges were being run by the federal government (26% say working well).

Most uninsured Americans live in states that won't run their own Obamacare exchanges
21% of Americans without health insurance do not use the internet
Most Americans have not felt impact of new health care law
Opinions on Obamacare remain divided along party lines as Supreme Court hears new challenge
Most of the uninsured plan to get coverage soon, but not necessarily because of the law