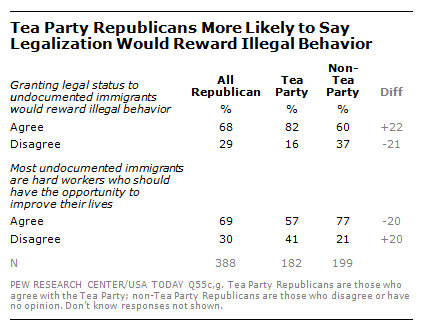 The Senate last June passed, on a 68-to-32 bipartisan vote, a comprehensive bill to overhaul the nation’s immigration law. But attention to the issue got shoved aside by the drawn-out fight over the budget and the debt-ceiling, and proponents now face the challenge of getting the Republican-controlled House to take up the legislation.

With that challenge in mind, “an unusual coalition of business executives, prominent conservatives and evangelical leaders” has come together to lobby 80 GOP lawmakers from 40 states, according to the New York Times.

The push to get conservative Republicans on board could reveal some of the same divides that were evident in the party during the just-ended fiscal standoff.

For instance, Republicans who agree with the Tea Party overwhelmingly say that granting undocumented immigrants legal status rewards illegal behavior (82% agree, 16% disagree), according to a Pew Research Center poll conducted in June. That compares with a narrower majority of Republicans who do not agree with the Tea Party (60% agree, 37% disagree).

The gap between conservatives and moderate/liberal Republicans carries over to the question of which should come first: allowing undocumented immigrants to apply for legal status while improvements are made in securing the border or doing so only after the border is effectively controlled. More than six-in-ten (62%) conservative Republicans say increased border security should come first, compared to 47% of moderate/liberal Republicans.