The 2014 elections for Congress are more than a year off, but at this early juncture, the Democrats hold a slim edge over Republicans on the so-called generic ballot, according to a Pew Research Center poll conducted just before the end of the government shutdown. (A generic poll is one that measures general sentiment on election choices but does not test specific candidate match-ups). 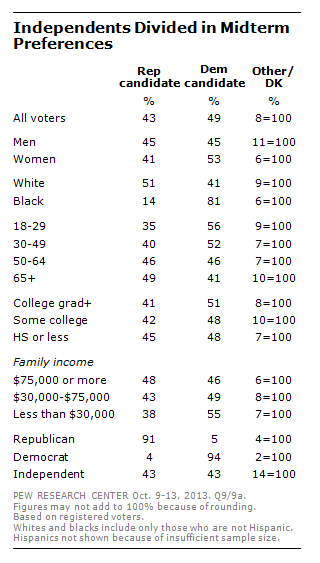 Four years ago, in November 2009, there was roughly the same balance of opinion a year ahead of the 2010 congressional elections (47% said they planned to vote for the Democratic candidate, 42% the Republican candidate). The GOP took control of the House in the 2010 elections.

The parties run well among their traditional bases of support. There is higher support for Democratic candidates among blacks, women and younger Americans. Republicans run relatively well among white voters, older voters and those with family incomes of $75,000 a year or more.

One other set of statistics that should be kept in mind when looking at results of national polls showing preference for one party or another: re-election rates for incumbent members of Congress has exceeded 80% since 1964, and was 90% in 2012, according to OpenSecrets.org.

Corrected: The original post said the Republicans “maintained” control of the House in 2010. This was changed to “took” control.