Amid the government shutdown and personnel furloughs, President Obama has cancelled a planned trip to Asia where he was to attend a Pacific Rim economic conference in Indonesia that begins today, and also hold a series of important diplomatic meetings in the region. 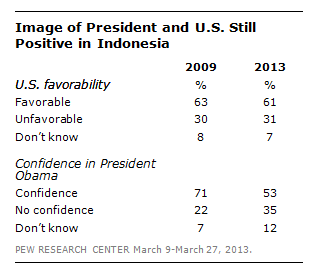 This marks the third time in as many years that Obama has scrubbed a trip to Indonesia.

The first two cancellations happened in 2010 when the president decided to stay in Washington, first for a critical health care vote in Congress and later due to a massive oil spill on the Gulf Coast. Now, with the government shutdown entering its second week and a fight looming over the debt ceiling, the president once again has decided to stay in Washington because of the political battles at home—as well as limited staff both at home and abroad due to the shutdown.

Despite the previous cancellations, America’s image has remained positive in Indonesia. In a spring 2013 survey, 61% of Indonesians expressed a favorable view of the U.S., essentially unchanged from 63% in a 2009 poll conducted shortly after President Obama took office.

Many Indonesians are aware that President Obama spent some of his childhood in the country. When asked in 2009, 79% of Indonesians said they knew the president lived in Indonesia as a child.

Today, Obama is popular in Indonesia—53% have confidence in him to do the right thing in world affairs. However, Obama’s popularity has declined since 2009, when 71% had confidence in the newly elected American president. Still, Indonesians give Obama one of the highest ratings among the majority-Muslim nations surveyed by Pew Research Center earlier this year (second to Senegal at 78%).