Traffic remained heavy on the first week that new online health insurances exchanges were open – there were 4.7 million unique visitors to healthcare.gov in its first 24 hours – and many consumers still had to contend with lengthy waits or a variety of technical problems. 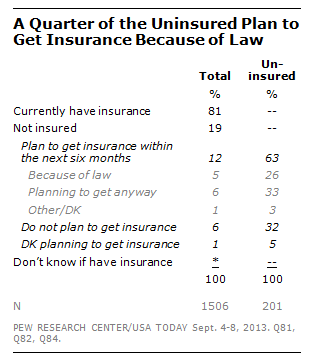 The law, officially known as the Affordable Care Act, contains an individual mandate that requires Americans and anyone they claim as dependents to obtain health insurance coverage in 2014 or pay a penalty.  A Pew Research Center survey in September found that 63% of those who do not have health insurance say they plan to get it within the next six months.

Just half of the uninsured (50%) are aware that low-income residents in their state will be eligible for federal subsidies.