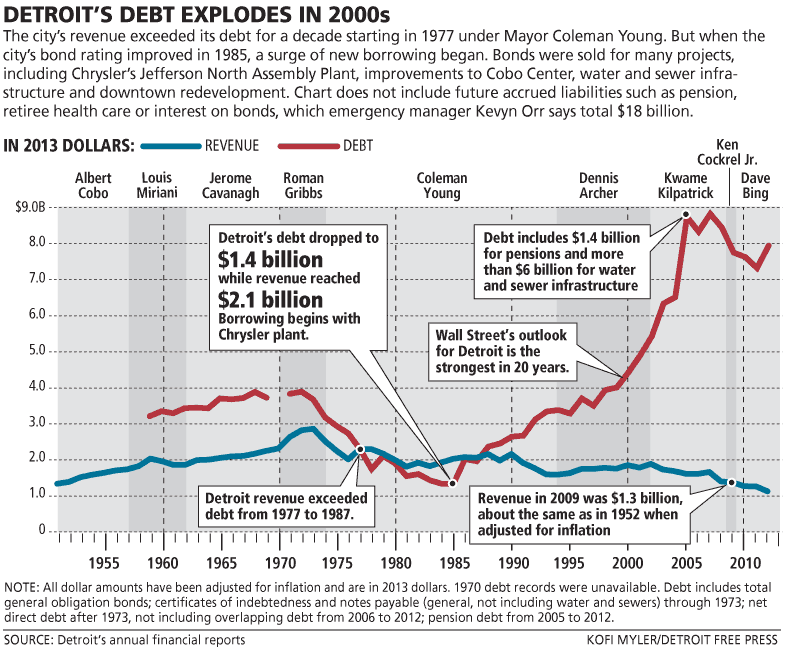 In The Sun Also Rises, impoverished Scottish war veteran Mike Campbell is asked how he went bankrupt. “Two ways,” he replies. “Gradually and then suddenly.”

That pretty well describes how Detroit became the largest U.S. city to file for bankruptcy protection this summer.

A stellar analysis of the city’s troubled financial history by the Detroit Free Press concluded that Detroit’s bankruptcy was the result of decades of poor decisions by city leaders — failure to trim payroll in the 1960s and 1970s as the city’s population and property-tax base began to fall, heavy borrowing to cover operating expenses in recent years, mismanagement of urban redevelopment projects, paying $1 billion in pension bonuses from 1985 to 2008, and much more. The paper distilled five decades’ worth of data into a series of graphics (of which this is just one) and accompanying text that clearly lay out a series of lost opportunities to avoid tumbling into a fiscal black hole.

“There have been periods of economic growth and hope, such as in the 1990s when the population decline slowed, income-tax revenue increased and city leaders balanced the budget,” the paper states. “But leaders failed to take advantage of those moments of calm to reform city government, reduce expenses and protect the city and its residents from another downturn.”

Despite recent violence, Chicago is far from the U.S. ‘murder capital’