Since Pew Research released its latest News IQ Quiz on Sept. 5, more than 250,000 people have taken our 13-question challenge. Now equipped with about two weeks of data, we decided to analyze how our online quiz-takers performed versus the general public who participated in the same survey.

The results are in: In our national survey of 1,052 randomly selected adults, Americans answered an average of 6.3 out of 13 questions correctly, including 1% who got them all correct. By contrast, those who have taken the quiz online so far have averaged 9.7 correct answers, with 9% getting perfect scores.

SPOILER ALERT: If you haven’t taken the quiz yet, you might want to do so now before you keep reading.

The volunteer quiz-takers did better than the general public on each of the 13 questions. There are notably wide gaps on certain questions, including two related to technology: About eight-in-ten online quiz-takers (79%) knew that Google Glass is a computer you can wear and nearly seven-in-ten (68%) identified Yahoo CEO Marissa Mayer from a photo. Less than half of the general public (42% and 34%, respectively) answered those two correctly. In addition, 81% of online quiz-takers correctly identified Egypt as the country highlighted on a map of the Middle East, compared to about half of the public (49%).

The two most difficult questions for the general public also proved toughest for our visitors. Just about half of visitors (53%) correctly selected the picture of Justice Anthony Kennedy as the Supreme Court’s swing vote in recent years; a minority of 44% correctly selected a chart showing the Dow Jones’ trend since 2008 as a steep drop followed by a steady recovery. 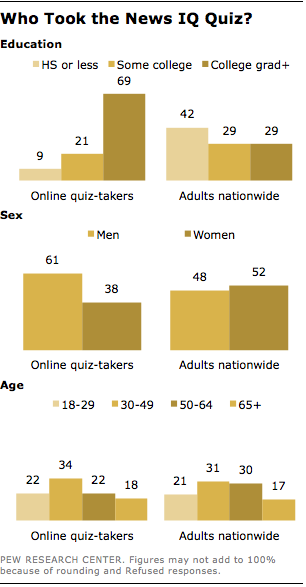 To be sure, the differences in the results partly reflect who volunteered to take a quiz about their knowledge of public affairs, unlike the random national sample interviewed. For instance, while 29% of the general public that Pew Research interviewed were college graduates, 69% of visitors had college degrees. (Both survey respondents and online quiz-takers were asked information about themselves.) Just 9% of online test-takers had only a high school diploma or less, compared to 42% of the nationwide survey. Meanwhile, men (61%) were more likely than women (38%) to take our website’s survey. However, those who took the quiz on our website were fairly similar to the national sample in terms of age. 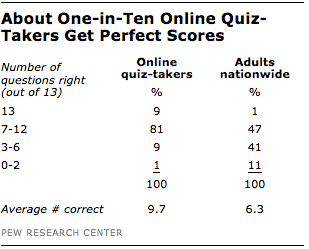 Even with the self-selected online sample, the general pattern of correct answers (and the two easiest questions) remained the same. Vast majorities correctly identified Edward Snowden’s photo (94%) and know that the Federal Reserve is in charge of monetary policy (92%).

Many people found the quiz via a link on Facebook, which was the largest direct referrer—29% of online test-takers. The scores of those quiz-takers (9.7 correct on average and 9% perfect scores) were identical to rest of the quarter-million people who have completed the quiz.

Notably, this IQ quiz was harder than many past ones for both the nationwide sample and web visitors. In our February quiz, about one-third (32%) of online quiz-takers and 8% of the general public aced the test.