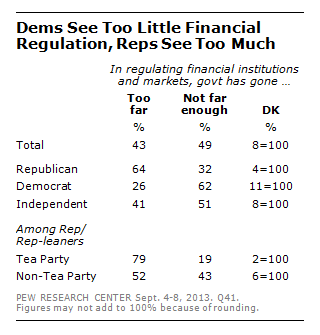 A new survey conducted this month found a continuation of this trend. The survey was conducted in the context of assessing the public’s view of the economy five years after the 2008 financial meltdown during which many banks and other financial institutions failed or faltered.

As sweeping new rules governing the banking industry kick in under the Dodd-Frank Act passed in 2010, the survey conducted in early September found that 64% of Republicans believe the government has gone too far in regulating financial institutions compared to 26% of Democrats – a 38 percentage point difference. In fact, 62% of Democrats believe regulation has not gone far enough, compared to 32% of Republicans. Independents fall in between, with 41% saying regulation has gone too far, and 51% saying it hasn’t gone far enough.