While there has not been an act of terrorism on U.S. soil on the scale of the 9/11 attacks that occurred 12 years ago this week, the attention currently being paid to anti-terrorism efforts because of the debate over government surveillance and incidents like the bombings at this year’s Boston Marathon have been constant reminders of the threat. 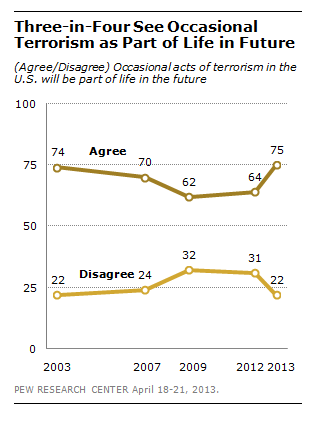 In a survey conducted in April, after the Boston bombings, 75% of Americans agreed with the statement “occasional acts of terrorism in the U.S. will be part of life in the future.” While majorities consistently have held that view over the past decade, the post-Boston number was a significant increase from 64% who held this view in 2012, and matched the previous high of 74% in 2003.

While a high number of Americans expect that future attacks will occur, the survey found little evidence that the public’s overall worries about terrorism have spiked. Just over a fifth (23%) of Americans said they were “very” worried that there will soon be another terrorist attack in the U.S., which was comparable to previous years. Even in October 2001, a month after the 9/11 attacks, just 29% said they were very worried about the possibility of a new attack.

The April survey also found that the public was evenly divided over whether there was more that the government could do to prevent attacks like the one in Boston, with 49% saying authorities could do more and 45% saying that there was not much more they could do.