The Obama administration said on Thursday that federal prosecutors had been directed not to target individual marijuana users in states where marijuana has been legalized for medical or recreational use. Instead, prosecutors have been told to put their focus on areas of enforcement that involve selling marijuana to minors or to cartels and gangs, and preventing sales to states where the drug is still illegal. 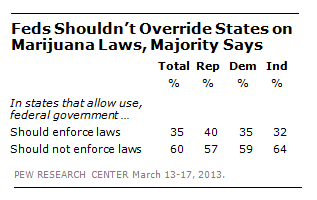 The announcement generally puts government policy in line with public opinion on the issue. A Pew Research Center survey conducted in March found that 60% of Americans said the federal government should not enforce anti-marijuana laws in states that allow use, compared to 35% who said the government should enforce its laws.

There was agreement across partisan lines on this issue. About six-in-ten Democrats (59%) and Republicans (57%) said the federal government should keep its hands off, as did 64% of independents.

The finding on federal enforcement was part of a survey in which a majority of Americans (52%) said the use of marijuana should be made legal, while 45% disagreed – the first time in more than four decades of polling on the issue that the 50% mark had been passed.

The survey found that 72% of Americans also believed that government efforts to enforce marijuana laws cost more than they were worth.