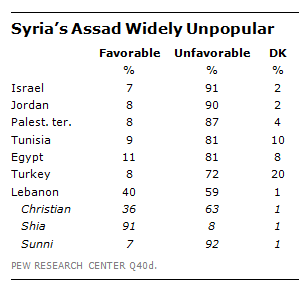 As the U.S., its European allies and various Arab states in the Middle East consider military action against the Syrian regime of Bashar al-Assad for his alleged use of chemical weapons, Assad doesn’t have many friends among neighbors in the region.

There is little public backing for the Syrian president from the mostly Sunni Arab publics in the Middle East, according to a Pew Research Center survey conducted before the recent allegations of chemical weapons use. Only the Shia in Lebanon (91%) had a favorable view of the Syrian leader. (Assad comes from a family of Alawites, a branch of Shia Islam.)

The intensification of the conflict in Syria in the last year has not altered regional views of Assad. He was not liked in 2012 and he is not liked today.

Nor is Assad popular in Russia, a long time ally of the Syrian regime and an opponent of outside intervention in the Syrian civil war. Just 27% of the Russian public support the Assad government. Most Russians (52%) have no opinion on the issue.