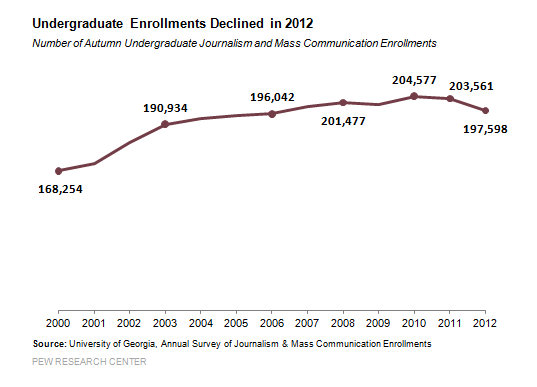 Journalism educators attending last week’s conference held by the Association for Education in Journalism and Mass Communication were greeted with news of the shrinking population in their classrooms. According to a new report from the University of Georgia (pdf), undergraduate enrollments in journalism and mass communication programs declined 2.9% in 2012, marking only the second time in two decades that they have dropped for two consecutive years. They fell 0.5% in 2011.

The drop is “significant,” says Lee Becker, the director of the James M. Cox Jr. Center for International Mass Communication Training and Research at the University of Georgia. At the same time, the report finds that the number of full-time faculty in communications and journalism programs increased by 5.9% in 2012.

But in the middle of a rapidly changing media environment, are students finding their journalism education worthwhile? Do j-school graduates feel prepared for their first day on the job? Findings in another new report from the Cox Center on a range of questions about the quality of their education suggest that most recent journalism and mass communication graduates appear quite pleased with their training—with a notable exception.

While the report’s authors concluded that most students indicated they “had gotten the skills and education they needed,” their responses, they added, did suggest a “preference for technical over more theoretical coursework.”