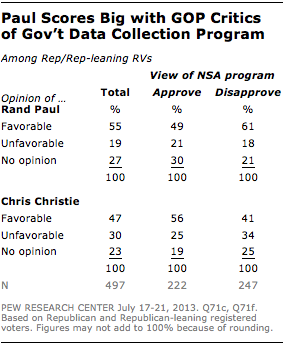 The debate over the government’s data collection program has revealed internal splits in both parties. In the GOP, the fight has gotten personal: Kentucky senator Rand Paul has been a leading critic of the program, while New Jersey governor Chris Christie responded in a speech last week that Paul’s libertarian views were “very dangerous” and could put American lives at risk.

Paul is seen favorably by 55% of Republican voters, compared to 47% who have a positive view of Christie, according to a new survey by the Pew Research Center, conducted July 17-21 among 1,480 adults, including 497 Republican and Republican-leaning registered voters. But the favorability ratings of each candidate vary when viewed through the filter of Republicans who approve of the NSA program and those who do not.

Those who disapprove of the National Security Agency program give Paul highly positive ratings: 61% favorable vs. 18% unfavorable. But Paul is not as popular among Republican voters who approve of the program; 49% of these people have a favorable view of Paul and 21% are unfavorable.

Christie’s favorability rating is more than two-to-one positive among GOP voters who approve of the data collection program (56% to 25%). Among those who disapprove of the program, though, his approval drops 15 points to 41%, with 34% saying they have an unfavorable impression of the governor.

Overall, Republican voters are split about the government’s collection of telephone and internet data for anti-terrorism efforts (50% disapprove and 46% approve).

The survey also found that Republican voters are divided over the more general question of whether anti-terrorism policies have gone too far in restricting civil liberties, or not far enough to protect the country. Nearly half (46%) say their bigger concern is the impact of anti-terror programs on civil liberties, compared with 38% who say they are concerned that the policies have not gone far enough to protect the country.

Rand Paul’s favorability rating is 21 points higher than Christie’s among Republican voters who say their greater concern is that anti-terror policies have gone too far in restricting civil liberties (63% vs. 42%). Their favorability ratings are comparable among those whose bigger concern is that policies have not gone far enough in protecting the country (53% favorable for Christie, 47% for Paul).

For now, the trend toward concerns about civil liberties is in Paul’s favor. Since 2010, there has been a 21-point jump in the percentage of Republican voters who say their greater concern is the impact of anti-terrorism policies on civil liberties (from 25% to 46%).