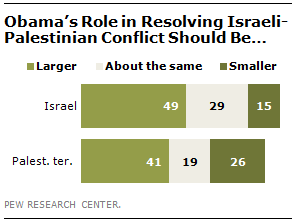 Many critics have questioned whether Secretary of State John Kerry’s focus on the Israeli-Palestinian conflict is worth the effort, given the region’s rich history of diplomatic disappointment, but Kerry has managed to bring the two sides together this week in Washington for their first talks in several years.  Polling finds limited optimism about the prospects for peace among Israelis and Palestinians, but many nonetheless welcome a larger American role in negotiating an end to the long running conflict. 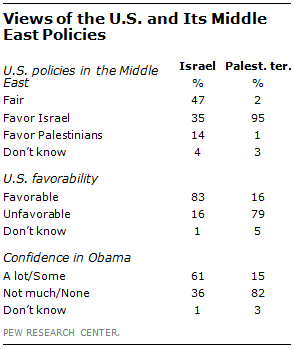 In a March-April Pew Research Center survey, half of Israelis said they believe a way can be found for Israel and an independent Palestinian state to coexist peacefully with each other, although there are sharp divisions within Israeli society on this question. A solid majority (56%) of Israeli Jews who describe themselves as secular believe peaceful coexistence is possible, compared with just 32% of those who describe themselves as traditional, religious or ultra-Orthodox. Meanwhile, fully 75% of Israeli Arabs think Israel and a Palestinian nation can peacefully exist side by side.

There are also sharp divisions among Israelis on one of the region’s most controversial issues, continued Jewish settlements in the West Bank. Nearly half of secular Jews (47%) think the settlements hurt Israel’s security, and an overwhelming majority of Israeli Arabs (84%) agree. However, a plurality (41%) of traditional, religious and ultra-Orthodox Jews believes the settlements enhance the country’s security.

Few Palestinians are optimistic about the likelihood of peace: only 14% said peaceful coexistence is possible, while 61% said it is not. About one-in-five Palestinian respondents (22%) volunteered that it depends.

More than four-in-ten Palestinians (45%) believe the best way to achieve statehood is through armed struggle. Considerably fewer think nonviolent resistance (15%) or negotiations (15%) are the best means for pursuing statehood.

However, despite their differences, many Israelis and Palestinians agree that the U.S. can play a useful role in negotiations. In the March-April poll, 49% of Israelis said they wanted the Obama administration to play a larger role in resolving the conflict, while just 15% thought it should have a smaller role.  A 41% plurality of Palestinians also wanted the Obama administration to become more involved.

Israeli views of the U.S. are quite different. On balance, Israelis believe American policies in the region are fair, and sizeable majorities give the U.S. a positive rating (83%) and express confidence in Obama (61%).