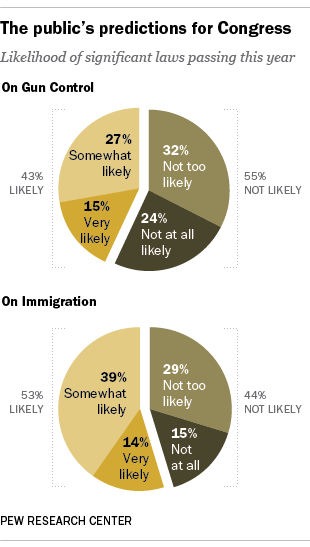 There’s a pretty good chance that immigration legislation will become law this year. The prospects for enacting a gun control bill are not nearly as promising.

These are the public’s predictions for two of this year’s major legislative initiatives. In June, before the Senate approved immigration legislation by a wide margin, more Americans viewed passage of “significant” immigration legislation as likely (53%) than unlikely (44%). Enactment of an immigration bill was hardly seen as a slam dunk, however. Only 14% viewed this as very likely.

In May, shortly after the Senate defeated the background checks proposals by Sens. Joe Manchin and Pat Toomey, 43% said passage of significant gun control legislation was likely, while 55% said it was unlikely.

Americans may have only a dim understanding of congressional process, but their legislative prognostications are hardly unreasonable. With many House Republicans staunchly opposed to the Senate bill, immigration reform advocates have recently become more pessimistic. But they are vowing a major campaign on behalf of the proposal over the August recess.

Most congressional observers would say that, if anything, the public overestimates chances for enactment of a gun control bill this year. Even with the families of the victims in the Newtown, Conn., shootings lobbying their case on Capitol Hill, the issue has fallen off the Senate’s radar since the failure of the Manchin-Toomey bill. Still, Vice President Biden has vowed “the fight is far from over.”