Though an effort led by New York Sen. Kirsten Gillibrand to establish a new system for prosecuting military sexual-assault cases has gained some key conservative support, Americans are split on how best to address the problem. 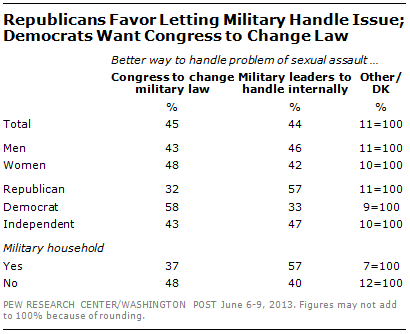 A Pew Research Center/Washington Post survey last month found the public as a whole was divided almost evenly: 45% said Congress should change military law, 44% said military leaders should handle the problem internally. But that masks a deep partisan divide: Democrats, by 58%-33%, favored changing the law, while Republicans, 57%-32%, favored letting the military take the lead. (Independents were more evenly divided, with a slight majority saying the military should handle the problem itself.)

Republicans and independents also were more likely to see reports of sexual assaults involving military personnel as individual acts of misconduct, while Democrats were slightly more likely to see them as reflecting deeper problems within military culture itself. Interestingly, women were not strongly in favor of one approach or another; less than half (48%) favor Congress taking action while 42% prefer the status quo.

Gillibrand’s plan would remove the authority of military commanders to decide whether or not to prosecute sexual-assault allegations within the ranks. The proposal was rejected by the Senate Armed Services Committee in June, but Gillibrand is trying to gather at least 51 co-sponsors to force a debate on it in the full Senate.