While the fate of the immigration bill passed by the Senate last month now lies in the hands of the Republican-controlled House, a Pew Research Center survey in June found that large majorities of the public agreed with a number of statements — pro and con -about the possible impact of providing a path to legal status for those here illegally. 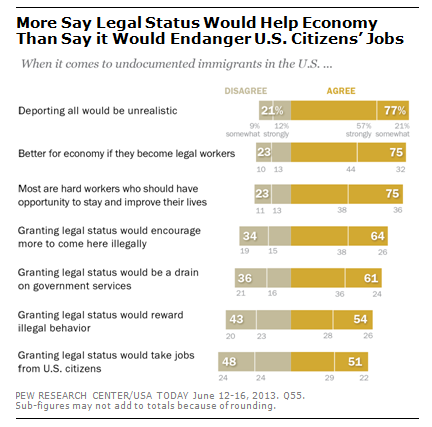 Three-quarters of Americans say it would be “better for the economy for undocumented immigrants to gain legal status and become legal workers.” Big majorities of Democrats (83%) and Republicans (70%) share that view. An equal number of Americans (75%) said most unauthorized immigrants are hard workers who should have the opportunity to stay and improve their lives.

In the category of “cons” about granting legal status, nearly two-thirds (64%) say such a move would encourage more immigrants to come to the U.S. illegally. More than three-quarters (77%) of Republicans and 53% of Democrats hold this view.

About six-in-ten (61%) predict granting legal status would result in a drain on government services. Again, more Republicans (72%) than Democrats (52%) say this would happen. Read more