Pope Francis made significant updates to the Vatican City’s laws today, addressing (among other things) issues related to child sexual abuse. Sexual violence, prostitution and possession of child pornography are now classified as crimes against children and can be punished more harshly, according to the Associated Press. 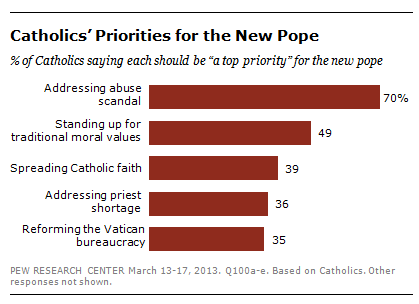 These laws apply only to the small population of the Vatican City State – an estimated 839 people – and are not part of the Catholic Church’s canon (religious) law, so they will not directly impact how the scandal continues to play out around the world. But Pew Research Center polling shows that addressing the sex-abuse scandal is something American Catholics consider important.

A Pew Research Center poll in March showed that seven-in-ten U.S. Catholics think addressing the abuse scandal should be “a top priority” for the new pope.

Just before Francis was elected, another poll found that when American Catholics are asked to identify in their own words the Catholic Church’s most important problem, fully a third (34%) mentioned sex abuse, pedophilia or some other reference to the scandal – far more than any other issue.

A poll conducted before Pope Benedict XVI’s retirement in February showed that nearly two-thirds of U.S. Catholics (63%) thought Benedict did a “poor” or “only fair” job of addressing the scandal.