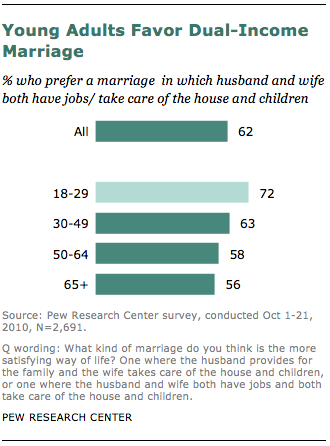 Americans’ attitudes toward an ideal marriage have changed dramatically over the past several decades. The share of the public that favors a marriage in which husband and wife both work and take care of the house and children is up from 48% in 1977 to 62% in 2010. During the same period, the share that prefers the model of the breadwinner husband and homemaker wife is down from 43% to 30%.

Young adults are often at the forefront of changing social norms. Adults younger than 30 are most likely to favor a dual-income marriage model (72%), over the breadwinner husband-homemaker wife model (22%). This is even more true for young women, who are more likely than young men to prefer dual-income marriage (78% vs. 67%). Young adults are also more positive about the impact on families of increasing numbers of women entering the workforce. 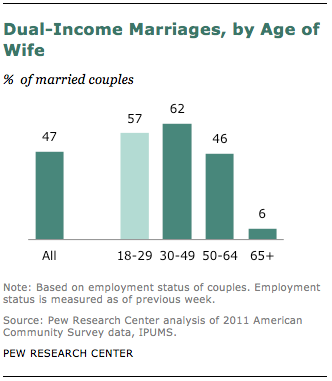 Given young adults’ strong preference for a dual-income marriage model and their positive attitudes about working women, we might expect that they would be more likely to embrace the dual-income model when they themselves are married.

However, it’s not the case. When we took a closer look at the most recent American Community Survey data, we found that 57% of young married couples (where the wife is younger than 30) are in a dual-income marriage, compared with 62% of couples in their 30s and 40s. These young couples also are more likely than older ones to include a breadwinner husband and homemaker wife (32% do). 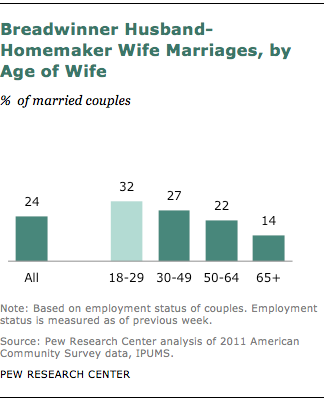 Why is that? The answer appears to be related to the age of their children. More than half of young couples (57%) have children ages 5 or younger at home, compared with 30% of couples in their 30s and 40s.

Even though many of today’s young couples don’t yet have the kind of egalitarian marriage they say they want, they’re closer to that ideal than their same-aged counterparts were a generation ago (in 1980). Back then, 51% of married couples under the age of 30 had dual incomes, compared with 57% now.