With the Senate on Thursday passing its version of immigration reform on a 68-32 vote, Americans are broadly supportive of its overall thrust but divided on issues of timing. 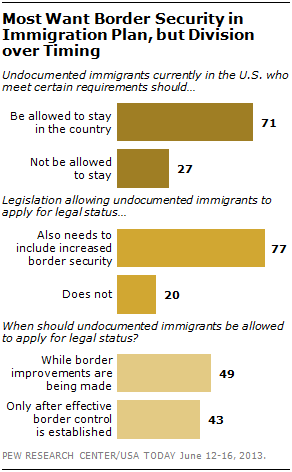 According to a new Pew Research Center/USA TODAY survey, 71% of Americans say undocumented immigrants who meet certain requirements should be allowed to stay in the country. And 77% say any legislation allowing them to do so also should provide for increased security along the borders.

The key difference, however, is how those two policy elements mesh together: 49% say undocumented immigrants should be allowed to apply for legal status while border improvements are being made, but 43% say they should have to wait until effective border control has been established.

Both parties are split on that aspect of immigration reform. Republicans who agree with the Tea Party favor a “border security first” approach by more than two-to-one (67% to 27%), while non-Tea Party Republicans are divided evenly (47%-47%). And while three-quarters of liberal Democrats (74% to 23%) say undocumented immigrants should be able to apply for legal status while border security is being increased, only about half (53%) of the party’s conservatives and moderates agree. Those divisions are likely to play out as immigration reform moves over to the House. Read more