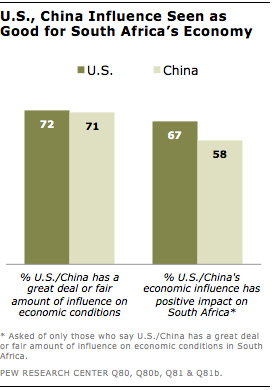 President Obama’s trip to South Africa this week aims to strengthen economic ties between the two countries at a time when China’s growing economic presence in the region has added a new dynamic.

According to the European Commission, in 2011, China accounted for a larger share of South Africa’s trade than the U.S. did. And the new Chinese President Xi Jinping highlighted the importance of the region to his country by making sub-Saharan Africa one of the destinations for his first trip abroad as president. (This is Obama’s first trip to South Africa since taking office.) 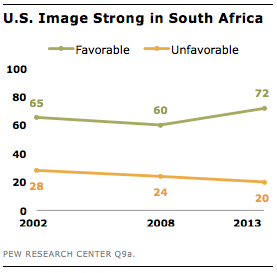 South Africans appear to recognize the competing economic influence of the two world powers – and to welcome ties with both countries. According to a new Pew Research Center poll, about seven-in-ten (72%) say the U.S. has a great deal or fair amount of influence on economic conditions in South Africa; 71% say the same about China. Among those who believe the U.S. and China have a significant economic impact on their country, majorities say both nations’ influence is a good thing for South Africa: 67% for the U.S. and 58% for China.

Regardless, Obama is likely to receive a warm welcome on the visit.  Roughly seven-in-ten (72%) hold a favorable view of the U.S., a higher percentage than in either 2002 or 2008. And a broad majority (74%) express confidence in Obama to do the right thing in world affairs, much higher than the 32% in 2008 who trusted his predecessor, President George W. Bush.