A majority (54%) say instances of sexual assaults in the military represent individual acts of misconduct, while 40% believe they result from underlying problems in the military’s culture. 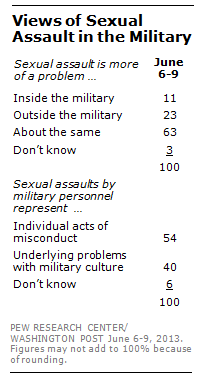 The public is evenly divided over whether the better way to handle the problem of sexual assault in the military is for Congress to make changes in military laws (45%) or to let military leaders to address the problem internally (44%).

About half of Americans (52%) have a great deal or fair amount of confidence that military leaders will make the right decisions when it comes to the problem of sexual assault in the military. Read more