Journalists and print loyalists who are dejected about the state of the U.S. newspaper business may be comforted — or perhaps made a bit envious — by the knowledge that in at least some other countries, newspaper circulation continues to rise smartly. The chart below, from The Economist’s Graphic Detail blog, uses data from the World Press Trends database to show where circulation per 1,000 people has risen and fallen the most over the past four years. 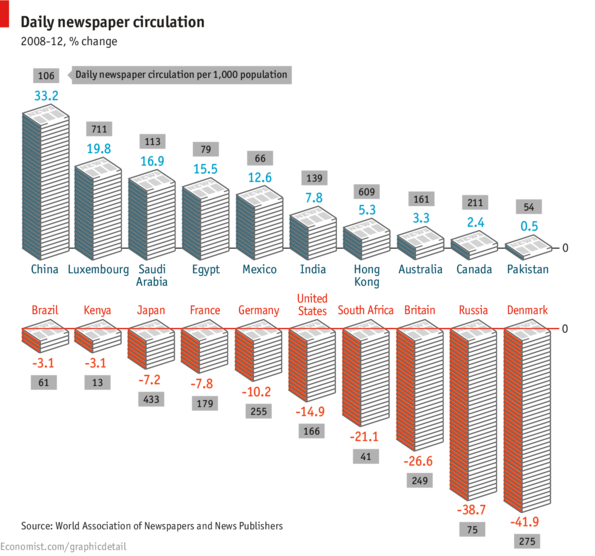 In its 2011 State of the News Media report, The Pew Research Center’s Project for Excellence in Journalism noted similar patterns and discussed several reasons why print readership is growing in some countries while tailing off in others. The most important growth factors, it seems, are rapidly rising literacy and disposable income combined with relatively low online penetration; those have created large numbers of new potential readers for whom print is still the most accessible news and information source.

Other factors identified in the Pew Research report, which may be more or less at play in different countries, include political democratization, economic liberalization, government subsidies, and greater reliance on circulation revenue as opposed to advertising.

But even in today’s most robust newspaper markets, the report says, there’s little complacency. “The view in most places around the world is not that they are immune to the problems of American newspapers, but rather that the U.S. industry is ahead of them in navigating a dangerous curve,” the Pew Research report states. “[T]hey can see their audience is moving online, as well as to television and satellite news channels. If not in the next two or three years, probably in the next five or ten, they will be faced with exactly the same problem we are.”