A survey conducted in early May after the Senate rejected a measure to expand background checks on private gun sales found that gun rights advocates continue to show a higher level of political activism on the issue than those who favor stricter gun control measures.

Among those who prioritize gun rights, 41% say they would not vote for a candidate with whom they disagreed on gun policy, even if they agreed with the candidate on most other issues. That figure is 10 percentage points higher than the number of gun control supporters (31%) who say gun policy is a make-or-break voting issue for them. 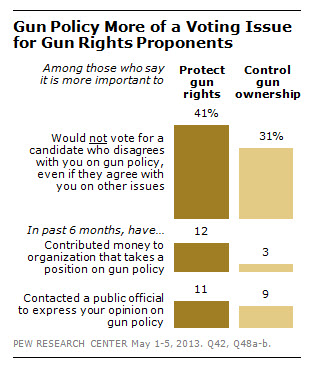 Meanwhile, overall impressions about the influence of the National Rifle Association (NRA) — one of the most politically active groups on the issue — were about the same this month as they were in the days following the shootings in Newtown, Conn. last December. Currently, 39% think the NRA has too much influence over gun control laws in this country; about half (53%) say either that the NRA has the right amount of influence (35%) or that it has too little influence (18%) over gun control laws. Read more

Colorado recall points to greater intensity among gun-rights supporters
Gun Rights Proponents Have Been More Politically Active than Gun Control Supporters
A public opinion trend that matters: Priorities for gun policy
A year after Newtown, little change in public opinion on guns
5 facts about the NRA and guns in America