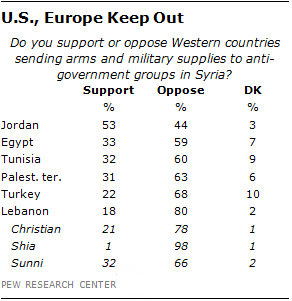 A Pew Research survey conducted earlier this spring found that 68% of Turks opposed Western countries sending weapons and other supplies to anti-government rebels in Syria — the second-highest level of opposition among the six predominantly Muslim countries surveyed in the region.

Similarly high majorities in Turkey opposed aid to the rebels by Arab nations (66%) and their own country (65%).

Erdogan has pressured the Obama administration to provide military aid to the rebels seeking to oust Syrian president Bashar al-Assad; hundreds of thousands of Syrian refugees have poured into Turkey, and Erdogan’s government has blamed Assad’s regime for car bombings that killed 46 people last week in a Turkish border town.

In the Pew Research survey, which was conducted before those blasts, 62% of Turks said they were “very” or “somewhat” concerned about the violence in Syria spreading to their country.

The Turks’ opposition to outside intervention in the Syrian conflict doesn’t, however, mean they support Assad. Of Turks surveyed, 72% said they had an unfavorable opinion of the Syrian leader (including 48% with a “very unfavorable” view); only 8% viewed Assad favorably.