Since 1997, only once has a majority of Americans said they were “basically content” with the federal government – in November 2001, two months after the 9/11 terrorist attacks.

Over this 15-year period, majorities have consistently said they are frustrated with government, with smaller percentages expressing anger. The percentage saying they are angry at the government reached a high of 26% in August 2011, following the deal to lift the debt ceiling. Currently, 19% feel angry at government, 58% are frustrated, while 20% are basically content.

About one-in-five (19%) Americans described themselves as “angry” at the government in a survey conducted in January. Among Republicans, 27% said they were angry compared to 12% of Democrats. The reverse was true in October 2006 when George W. Bush was president – 28% of Democrats said they were angry at government compared to 7% of Republicans. Read more 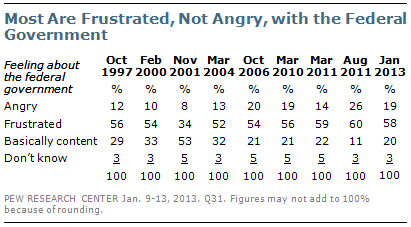