Social networking has spread around the world with remarkable speed. In countries such as Britain, the United States, Russia, the Czech Republic and Spain, about half of all adults now use Facebook and similar websites. These sites are also popular in many lower-income nations, where, once people have access to the internet, they tend to use it for social networking.

The most popular use of social networking in 21 countries surveyed last spring was sharing views on music and movies; a median of 67% said they put the sites to this use. Discussion of politics ranked significantly lower down the list with a median of 34% saying they engaged in it online. 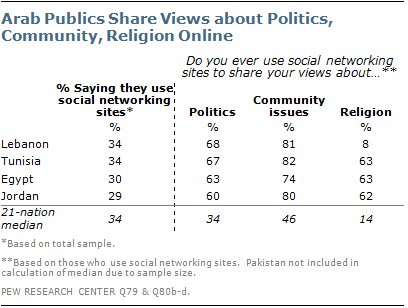 Not everyone in advanced economies is using social media

In India, few use social media to share political views

Social Networking Popular Worldwide, with Israel in the Lead