Opinions about Congress, while little changed over the past year, remain very negative, according to a survey conducted Jan. 9-13. Just 23% offer a favorable opinion of Congress, while 68% express an unfavorable view.

Favorable views of Congress hit 50% in spring 2009 but subsequently have plummeted. That contrasts with the period between 1985 and 2005 when Congress was generally viewed more favorably than unfavorably.

At a time when there are wide partisan differences in opinions about government, there is broad agreement that members of Congress are the problem. Virtually identical majorities of Republicans (58%), Democrats (57%) and independents (56%) say that lawmakers, rather than the political system, are the problem with Congress. Read more 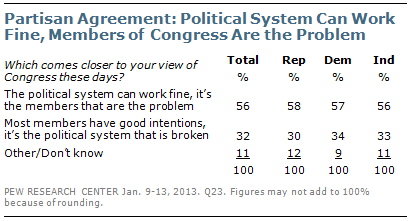