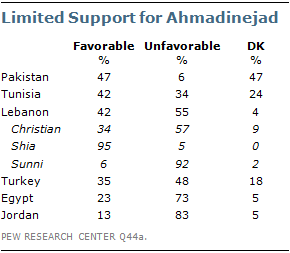 Iranian President Mahmoud Ahmadinejad received largely negative ratings in most of the predominantly Muslim nations surveyed last spring, with a median of only 39% viewing him favorably.

Ahmadinejad is currently visiting Egypt in the first visit by an Iranian leader since the two countries broke off diplomatic relations three decades ago. In the 2012 survey, 73% of Egyptians gave him an unfavorable rating; just 23% viewed him favorably.

More than eight-in-ten Jordanians (83%) expressed an unfavorable view of Ahmadinejad, as did 55% of those in Lebanon and 48% of those in Turkey.

Pakistan, was an exception. About half of Pakistanis (47%) expressed a favorable opinion of Ahmadinejad, while just 6% gave him an unfavorable rating (47% did not offer an opinion). Also, a plurality of Tunisians (42%) said they held a positive view of the Iranian leader.

Aside from Ahmadinejad’s own image, overall ratings of Iran were negative in many predominantly Muslim nations who are its neighbors. Roughly six-in-ten Lebanese (61%) gave the Islamic Republic a negative rating, although views were sharply divided among the country’s major religious communities. In Turkey, 55% had an unfavorable opinion about Iran, while 26% expressed a favorable view.