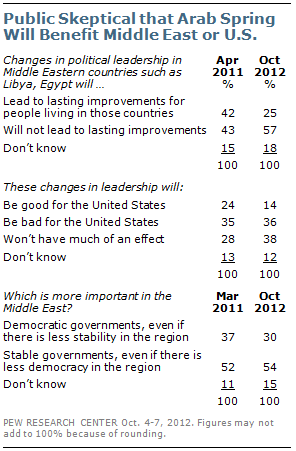 Two years after the start of huge protests in Cairo’s Tahrir Square, doubts have spread about the political direction of countries swept up in the Arab Spring.

In an October poll, nearly six-in-ten Americans (57%) said they do not believe the changes in political leadership in Middle Eastern countries such as Egypt and Libya will lead to lasting improvements for people living in those countries. That was up sharply from 43% in April 2011.

Nearly half (49%) of Republicans said changes in the Middle East will end up being bad for the United States, while the plurality view among Democrats (48%) was that the effect for the U.S. will be minimal. Read more