In addition, the wide partisan differences in views of the Supreme Court that emerged in the wake of the health care ruling remained. In the December survey, 62% of Democrats said they had a favorable opinion of the Supreme Court; that was little changed from July (64%), but 10 points higher than in April (52%).

By contrast, Republicans continued to express less positive views of the Supreme Court than they did prior to its decision on the Affordable Care Act. In the December survey, 44% said they had a favorable opinion of the court, little changed from July (38%). In April, a 56% majority of Republicans had a favorable view of the court. Read more 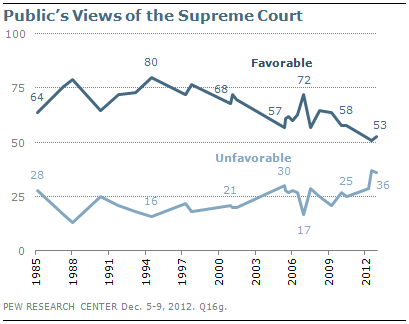