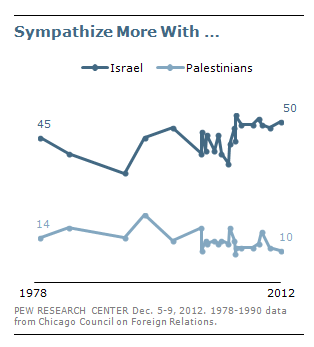 Among religious groups, white evangelical Protestants remain strongly supportive of Israel. Two-thirds (67%) say they sympathize more with Israel; only 5% say they sympathize more with the Palestinians. Opinion among other religious groups is more mixed. Catholics, for example, offer more sympathy for Israel than the Palestinians by a 44% to 11% margin. Read more

5 facts about how Americans view the Israeli-Palestinian conflict
As Obama meets with Netanyahu, Americans are divided on U.S. role in Israeli-Palestinian dispute
A new perspective on Americans’ views of Israelis and Palestinians
Partisans Divided About Level of U.S. Support for Israel
Strong support for Israel in U.S. cuts across religious lines
Quiz: Are you a Core Conservative? A Solid Liberal? Or somewhere in between?
How the Coronavirus Outbreak Has – and Hasn’t – Changed the Way Americans Work
Most Americans Are Critical of Government’s Handling of Situation at U.S.-Mexico Border
Key facts about Asian Americans, a diverse and growing population
Defining generations: Where Millennials end and Generation Z begins