Among a dozen specific spending and tax options for reducing the national debt and deficit, only three win majority approval from the public. They include: raising the tax rate on incomes over $250,000 (69% approve); limiting the amount of deductions a taxpayer can claim (54% approve); and raising the tax rate on investment income (52% approve). While limiting deductions overall receives majority support, fewer (41%) support limiting the home mortgage interest deduction.

There are substantial partisan differences over most of these proposals. Democrats are far more likely than Republicans to support reducing military defense spending and raising taxes on personal incomes over $250,000 and on investment income. A majority of Democrats (57%) approve of defense cuts, compared with 22% of Republicans.

By contrast, Republicans are about twice as likely as Democrats to support cuts in federal funding for programs that help low-income people (53% vs. 24%). And while Republicans are divided over whether to gradually raise the age for Social Security benefits, fully 67% of Democrats disapprove. Read more 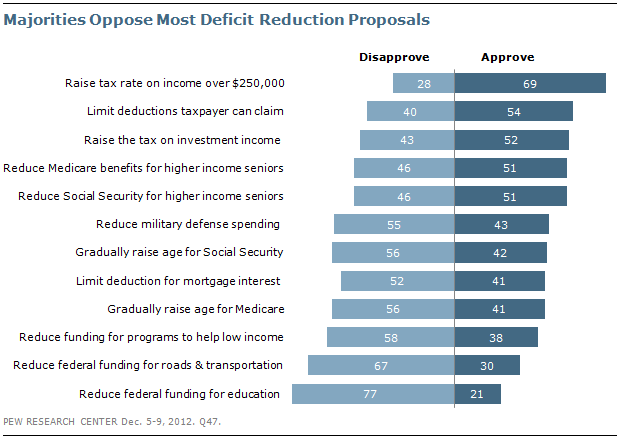 Americans Divided on Whether to Limit Mortgage Interest Deduction
Proposals to Reduce Deficit and Debt
Big Political Divide on Proposals to Raise Taxes on Wealthy
Balancing Budgets: Is Medicare a Solution? Is it a Problem?
Dealing with deficit a top public priority, but little agreement on how