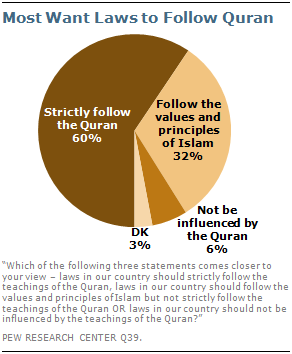 Older Egyptians are especially likely to believe laws should strictly follow the Quran: more than two-thirds of those 50 or older (68%) agree with this position, compared with about half (54%) of 18-29 year-olds.

A similar split arises by education. For example, 68% of those with a primary education or less want to strictly follow the Quran, while just 55% of the college-educated want the same.

Egyptians with a secondary or college education are now 12 points less likely than in 2011 to believe the country’s laws should strictly follow the Quran. On the other hand, among those with a primary education or less, the percentage who hold this view has increased by 10 points. Read More