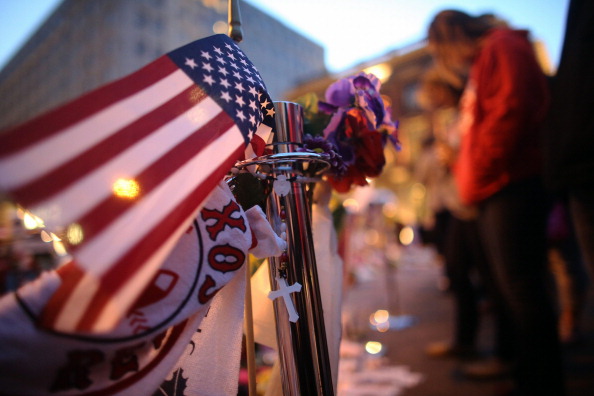 BOSTON, MA – APRIL 20: People gather at a makeshift memorial for victims near the site of the Boston Marathon bombings at the edge of the still-closed section of Boylston Street a day after the second suspect was captured on April 20, 2013 in Boston, Massachusetts. A manhunt for Dzhokhar A. Tsarnaev, 19, a suspect in the Boston Marathon bombing ended after he was apprehended on a boat parked on a residential property in Watertown, Massachusetts. His brother Tamerlan Tsarnaev, 26, the other suspect, was shot and killed after a car chase and shootout with police. The bombing, on April 15 at the finish line of the marathon, killed three people and wounded at least 170. (Photo by Mario Tama/Getty Images)