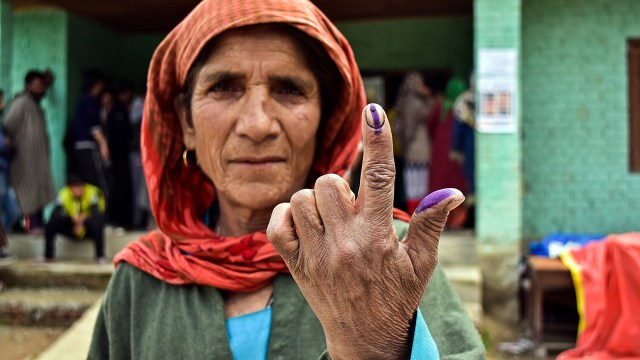 KASHMIR, SHADIPORA, JAMMU AND KASHMIR, INDIA – 2019/04/11: A woman seen showing her inked finger after voting at a polling station during the first phase of general election in Shadipora.
The first phase of the general elections began with polling in 91 constituencies spread across 18 states and two union territories. The Jammu and Kashmir recorded 47% per cent turnout. (Photo by Saqib Majeed/SOPA Images/LightRocket via Getty Images)

A woman seen showing her inked finger after voting at a
So far, Trump has granted clemency less frequently than any president in modern history
Biden Begins Presidency With Positive Ratings; Trump Departs With Lowest-Ever Job Mark
Quiz: Where do you fit in the political typology?
British, French and German Publics Give Biden High Marks After U.S. Election
Almost all U.S. presidents, including Trump, have been Christians