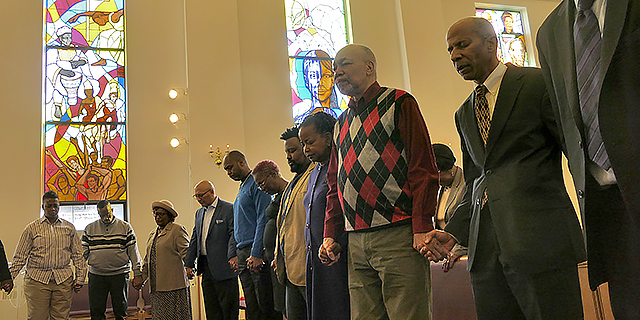 COVENANT BAPTIST CHURCH, WASHINGTON D.C., UNITED STATES OF AMERICA : On Martin Luther King Day, people attending a service dedicated to Martin Luther King pray and hold hands. The Baptists comprise a group of Evangelical Christian churches. Their doctrine is based on the autonomy of the local churches, the separation of Church and State and the authority of the congregation. The importance of the Bible, salvation, believer’s baptism are the main tenets of this doctrine, along with a missionary spirit and a moral commitment. The number of Evangelicals is estimated at 565 million around the world, a quarter of the whole Christian community. Martin Luther King Day is an American federal holiday, observed since 1986 on the third Monday of January, around Martin Luther King Jr”u2019s birthday. He was a Baptist minister and non-violent activist of the African-American Civil Rights Movement in the U.S. He was assassinated on April 4, 1968, in Memphis. (Photo by Reza/Getty Images)