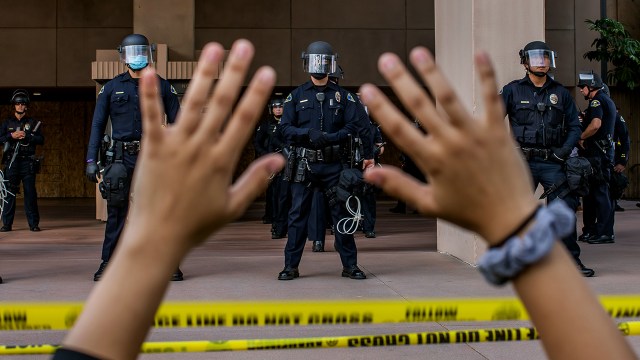 A demonstrator holds her hands up while she kneels in front of the Police at the Anaheim City Hall on June 1, 2020 in Anaheim, California, during a peaceful protest over the death of George Floyd. – Major US cities — convulsed by protests, clashes with police and looting since the death in Minneapolis police custody of George Floyd a week ago — braced Monday for another night of unrest. More than 40 cities have imposed curfews after consecutive nights of tension that included looting and the trashing of parked cars. (Photo by Apu GOMES / AFP) (Photo by APU GOMES/AFP via Getty Images)

10 things we know about race and policing in the U.S.