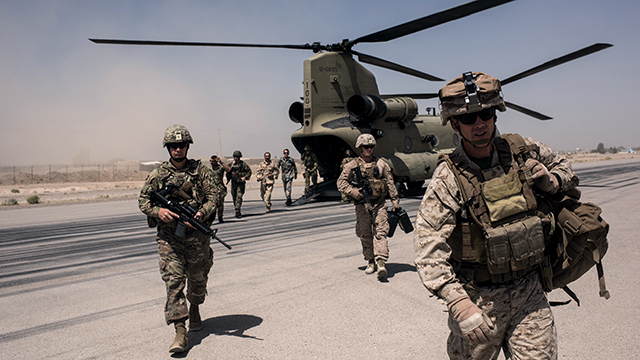 CAMP BOST, AFGHANISTAN – SEPTEMBER 11: U.S. service members walk off a helicopter on the runway at Camp Bost on September 11, 2017 in Helmand Province, Afghanistan. About 300 marines are currently deployed in Helmand Province in a train, advise, and assist role supporting local Afghan security forces. Currently the United States has about 11,000 troops in the deployed in Afghanistan, with a reported 4,000 more expected to arrive in the coming weeks. Last month, President Donald Trump announced his plan for Afghanistan which called for an increase in troop numbers and a new conditions-based approach to the war, getting rid of a timetable for the withdrawal of American forces in the country. (Photo by Andrew Renneisen/Getty Images)