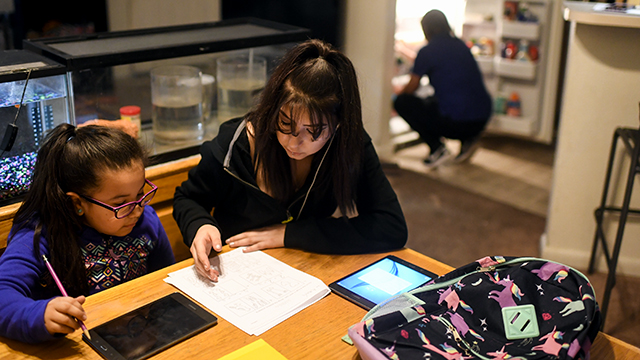 DENVER, CO – JANUARY 25: Katrina Archuleta, 17, helps her sister, Amani Gonzalez, 5, with math homework at their home on Thursday, January 25, 2018. Their family of eight lives in a three-bedroom apartment on south Federal Boulevard. Though housing large enough to accommodate the family of eight has become unaffordable, they will soon be moving to a five-bedroom home through Habitat for Humanity. Colorado has struggled to supply enough housing to match its growth. As a result, home prices and rents are soaring making it particularly difficult for entry level and low-income buyers. Households earning less than $50,000 a year are diverting $2 billion in extra spending because of that lack of supply and it is putting a strain on the entire economy. (Photo by AAron Ontiveroz/The Denver Post via Getty Images)