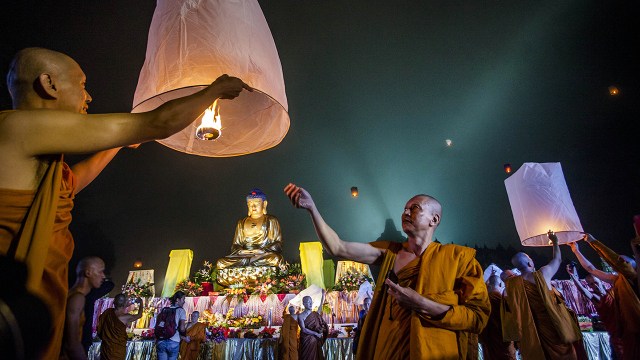 MAGELANG, CENTRAL JAVA, INDONESIA – MAY 15: Buddhist monks release a lantern into the air at Borobudur temple during celebrations for Vesak Day on May 15, 2014 in Magelang, Central Java, Indonesia. Vesak is observed during the full moon in May or June with the ceremony centered around three Buddhist temples, pilgrims walk from Mendut to Pawon, ending at Borobudur. The holy day celebrates the birth, the enlightenment to nirvana, and the passing of Gautama Buddha’s, the founder of Buddhism. (Photo by Ulet Ifansasti/Getty Images)