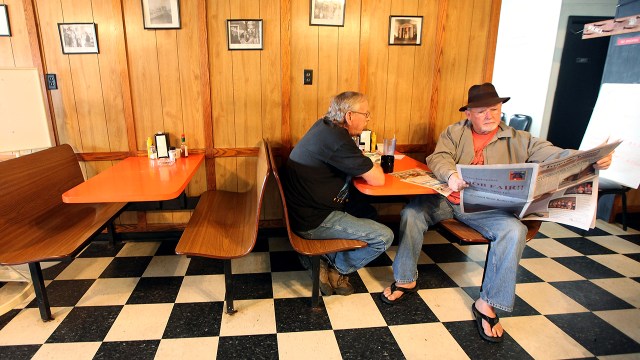 BOONEVILLE, KY – APRIL 22: A man reads a newspaper in a restaurant on April 22, 2012 in Booneville, Kentucky. Daniel Boone once camped in the Appalachian mountain hamlet of Owsley County which remains mostly populated by descendants of settlers to this day. The 2010 U.S. Census listed Owsley County as having the lowest median household income in the country outside of Puerto Rico, with 41.5% of residents living below the poverty line. Familial and community bonds run deep, with a populace that shares a collective historical and cultural legacy uncommon in most parts of the country. However, the community of around 5,000 struggles with a lack of jobs due to the decline in coal, tobacco and lumber industries along with health issues including drug addiction without effective treatment. (Photo by Mario Tama/Getty Images)