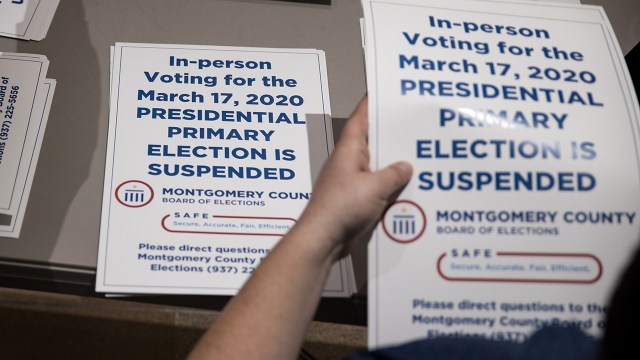 TOPSHOT – County election workers hand out election delayed signs to put up at polling stations in Dayton, Ohio on March 17, 2020 after the primaries were canceled. – Ohio health officials ordered the state’s polling stations closed for Tuesday’s Democratic primary, as the governor defied a court ruling and declared a health emergency over coronavirus.”While the polls will be closed tomorrow, Secretary of State @FrankLaRose will seek a remedy through the courts to extend voting options so that every voter who wants to vote will be granted that opportunity” at a later date, Governor Mike DeWine said late Monday on Twitter. (Photo by Megan JELINGER / AFP) (Photo by MEGAN JELINGER/AFP via Getty Images)